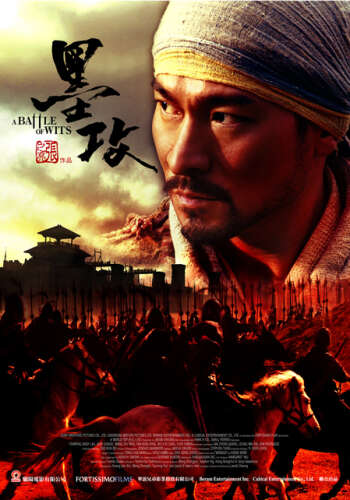 China, 370 B.C. The harrowing era of the warlords is vividly brought to life in this spectacular war epic, a recreation the popular comic series BOKKO. The small city state of Liang lies defenceless against the terrifying hordes of the Zhao nation. But the appearance of Ge Li (Andy Lau), a mysterious stranger from the Mo-Tsu tribe, signals both hope and apprehension among the citizens of Liang. Armed with only his wits, he begins to fight back the armies of Zhao, even as he risks the betrayal of the very people he seeks to protect…

Jacob Cheung is one of the most acclaimed filmmakers in the Hong Kong cinema.  He is renowned for refusing to compromise his filmmaking just to cater to the market.  Born in Hong Kong, Jacob Cheung graduated from the Artiste Training Center of Hong Kong Television Broadcasts Limited (HKTVB).  Early in his career, Mr. Cheung served as a production manager on films such as MR. VAMPIRE and MY LUCKY STARS, which featured the combined acting talents of Jackie Chan, Sammo Hung and Yuen Biao.  Jacob Cheung made his directorial debut LAI SHI, CHINA'S LAST EUNUCH in 1986.  He started his career as producer with THIS THING CALLED LOVE (1990), a Woody-Allenesque comedy on love and marriage.  All of his films have been serious dramas and tragic-comedies, two of which, BEYOND THE SUNSET (1989) and CAGEMAN (1992), won the Best Film Award at the Hong Kong Film Awards, the latter also taking the Best Director Award.