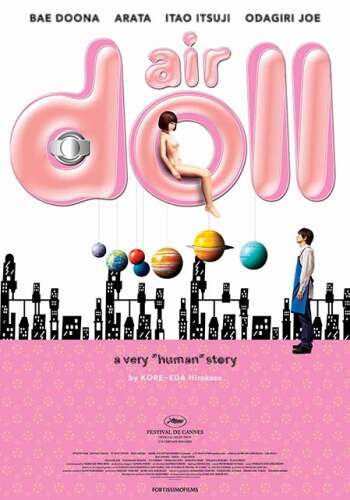 A life-size Air Doll lives in a shabby apartment in Tokyo. She cannot speak, nor can she move. But she is the only companion her middle-aged master has. He talks to her, puts her in a bath and makes love with her every day after he returns from work.

This routine life is disrupted when fantasy turns into reality. The Air Doll suddenly comes to life, filled with a soul. Like a newborn baby, she doesn't understand what is going on around her, but she sees a world waiting to be explored outside the apartment. Eventually venturing to the outside world, the Air Doll is fascinated by everything she sees, and though she meets many people in all walks of life, they can't seem to provide her an answer to what "being alive" means.

When the Air Doll wanders into a video store, her world is forever changed. She meets Junichi, the clerk, and immediately falls in love with him. Air Doll begins working in the store and everyday, she and Junichi become closer: they go to the movies and explore the city together...like a couple. Everything is going perfectly for the Air Doll, until one day when her hand is accidentally cut and she begins to deflate in front of Junichi...

A romantic fantasy that explores the complexities of love and loss, joy and pain, fantasy and reality, internationally acclaimed director Kore-eda Hirokazu returns with this bittersweet love story that examines the intricacies and frailties of human existence.

His first feature film, MABOROSI, won the Osella d’oro at the Venice Film Festival in 1995. His second feature, AFTERLIFE, distributed in over 30 countries, brought Kore-eda international acclaim. His third film DISTANCE (HAF 2000 Project), was selected to screen In Competition at the Cannes Film Festival 2001 and his fourth film, NOBODY KNOWS, received the Best Actor Award at the Cannes Film Festival 2004 for Yagira Yuuya. 2006’s HANA set in the Edo period is his first period piece. The film explored themes of chivalry and revenge.

In 2008, STILL WALKING, loosely based on his own experience, received its international premiere in Toronto, and won the Best Director Award at the Asian Film Awards and the Golden Astor Prize at the Mar del Plata International Film Festival.