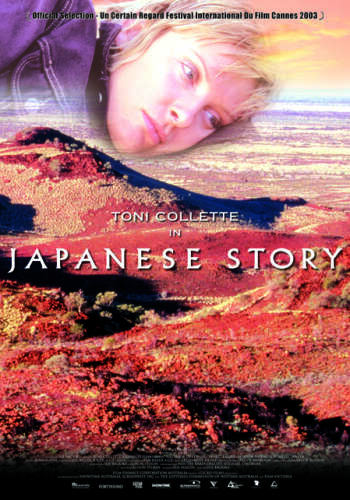 Sandy, a geologist, finds herself stuck on a field trip to the Pilbara desert with a Japanese man she finds inscrutable, annoying and decidedly arrogant. Hiromitsu’s view of her is not much better. Things go from bad to worse when they become stranded in one of the most remote regions on earth. JAPANESE STORY is a journey of change and discovery for its two lead characters.

Sue Brooks trained at the Australian Film Television and Radio school, and directed the award winning short films THE DROVER'S WIFE and AN ORDINARY WOMAN before her first feature ROAD TO NHILL. JAPANESE STORY was her second feature film for which she and the film won numerous awards including eight (Best Film, Best Director, Best Actress... etc.) at the Australian Film Institute Awards and many more international prizes. The film was selected for Cannes Un Certain Regard, Telluride, Toronto, Pusan, Vancouver, London, Miami, Chicago, Hawaii, and Bangkok.