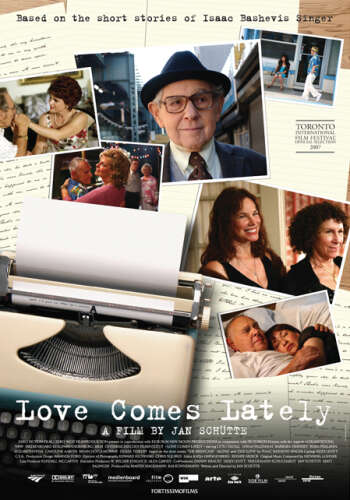 Though approaching his eighties, Max Kohn shows no signs of slowing down. He pursues his love life – both real and imagined – with youthful vigor, thereby risking his relationship to Reisel, the woman he loves but neglects. Based on the short stories “The Briefcase,” “Alone” and “Old Love” by Isaac Bashevis Singer, LOVE COMES LATELY is a film about real and imagined longings, the never ending dream of love and the power of fiction.

Jan Schütte started making movies in 1982. His first feature length film, DRAGON'S CHOW (1987), was shown at the Venice Film Festival and was sold to several territories worldwide including the USA. With WINKELMANN'S TRAVELS (premiered 1990 at Venice Film Festival) and BYE BYE AMERICA (premiered at 1994 Cannes Film Festival), Jan Schütte became one of the most interesting filmmakers of current German cinema. FAT WORLD was released by Polygram in 1998. His film about Bertold Brecht, THE FAREWELL, premiered at the Cannes Film Festival in 2000 and was sold to 14 territories. With SUPERTEX (2003), Jan directed a film based on a novel by Leon De Winter. He taught directing at the Filmakademie Baden-Württemberg and was a visiting professor in Harvard, NH, in 2000 and 2006. He has won international prizes such as 'Premio Cinecritica Venice' and the 'Prix Francois Truffaut'. In 2002 Jan Schütte, together with Martin Scorsese, David Lynch and Tilda Swinton, was on the jury board at the Cannes Film Festival. He is a member of the German Academy of the Arts and European Film-Academy.