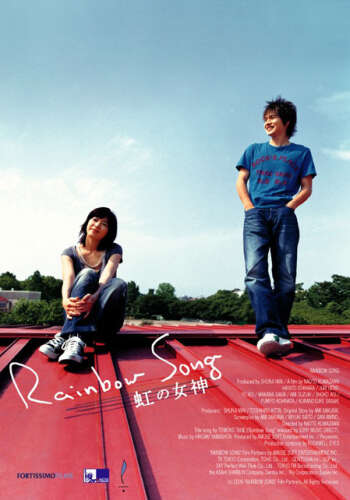 One day Tomoya, an incompetent but well-meaning staffer at a TV production company, discovers that his college friend Aoi Sato died in a plane crash in the United States. As he struggles to deal with the devastation, he cannot help but think of their past together, from their first meeting to their final farewell. When they first became friends, a circum-horizontal arc – a rare, flat phenomenon that looks like a rainbow – graced the sky. From failed romances to independent film projects to TV production ambition, Tomoya and Aoi developed a unique relationship. Sometimes, the very thing we search for, we cannot recognize until it is too late...but we can feel lucky knowing that we had something truly special, for a while.

Born in 1967, Aichi, Japan, Naoto Kumazawa began directing independent films as a student. After graduating, he joined a production company while continuing to work on his own productions. As a freelance, he directed many of his own works in the documentary and music video fields. In 2004, his first commercial film, Tokyo Noir, was released, followed by Letters from Kanai Nirai in 2005, which garnered many accolades both inside and outside of Japan. His latest film, Vanished, stars Ken Miyake from V6, one of the leading pop star groups in Japan and Asia.