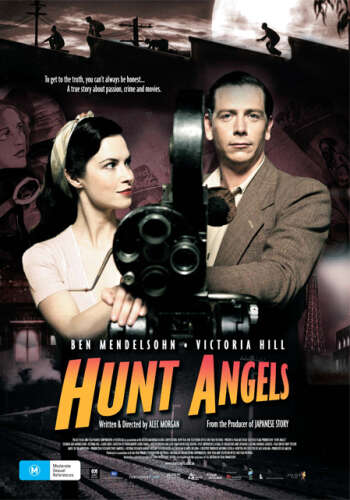 The award-winning HUNT ANGELS is a non-fiction feature film about Rupert Kathner and Alma Brooks who in 1939 began a movie making spree that took on the powerful cinema conglomerates, a corrupt police commissioner, the cultural cringe and a police posse all in their passionate pursuit to make the great Australian film.

HUNT ANGELS uses an innovative digital composite technique whereby the characters come alive in the real world of Sydney in the 30s and 40s. The performances are filmed in period settings and against green screen, the choreography of movement and lighting having been matched to background elements, and then inserted into striking b/w archival photographs which have been manipulated to appear as three dimensional space.

Alec Morgan is one of Australia's most experienced documentary filmmakers whose productions have screened on ABCTV and internationally. His credits include the multi-award winning LOUSY LITTLE SIXPENCE (1983), a seminal film that exposed the taking of Aboriginal children from their families, ADMISSION IMPOSSIBLE (1992) an investigation into the controversial White Australia immigration policies, and THE END OF THE EARTH (1990), winner of the Gold Medal for Best Environmental Film at the 1990 New York Film Festival. His short film directing credits include OLD FELLA NOW, (1980) winner of Best Short Film at the Adelaide Film Festival, and he scripted the comedy, DUSTY HEARTS (1990), winner of Best Short Film at the 1991 Asia-Pacific film festival. He was Creative Head of the television series OUR CENTURY (1999) for the Television Nine Network and a co-producer of THE SECRET COUNTRY (1988) a series that uncovered Australia's secret history. HUNT ANGELS is his first feature film.