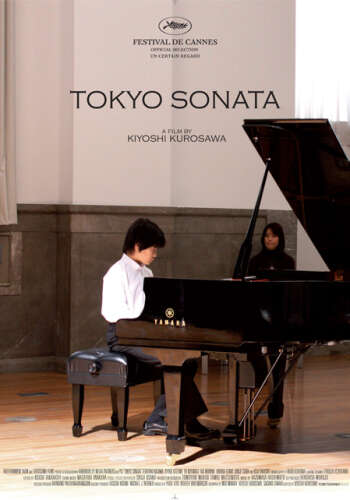 TOKYO SONATA is a portrait of a seemingly ordinary Japanese family. The father who abruptly loses his job conceals the truth from his family; the eldest son in college hardly returns home; the youngest son furtively takes piano lessons without telling his parents; and the mother, who knows deep down that her role is to keep the family together, cannot find the will to do so. From the exterior, all is normal and the same. But somehow, a single, unforeseeable chasm has appeared within the family, only to spread ever so quietly and quickly to disintegrate them.

Born on July 19th, 1955 in Kobe, Hyogo Prefecture, Japan, Kurosawa started directing 8mm independent films while studying Sociology at Rikkyo University. In 1980, his first work SHIGARAMI GAKUEN screened at PIA Film Festival. Kurosawa then spent the next few years studying with directors Kazuhiko Hasegawa and Shinji Somai. In 1983, he made his commercial debut with the feature film, KANDAGAWA WARS.

In the next couple of years, THE EXCITEMENT OF THE DO-RE-MI-FA GIRL and GUARD FROM UNDERGROUND were released and Kurosawa attracted enthusiastic fans. In 1992 Kurosawa won a coveted spot in the Sundance Institute Screenwriter’s Lab with his original screenplay CHARISMA.   His SUIT YOURSELF OR SHOOT YOURSELF! series (1995-1996) and THE REVENGE series (1997) created more avid Kurosawa fans.  Following the debut of CURE at the 1997 Tokyo International Film Festival, the film achieved international recognition and was theatrically released in many parts of the world. Kurosawa went on to win the Best Director prize for CURE at the Yokohama Film Festival.