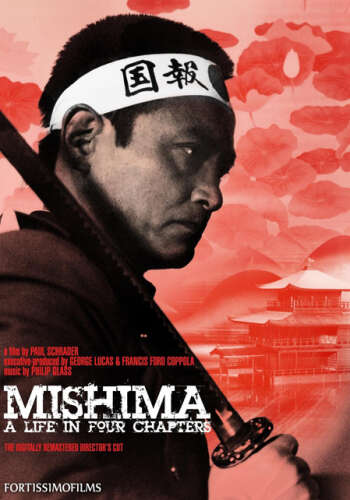 Paul Schrader’s visually stunning, collage-like portrait of acclaimed Japanese author and playwright Yukio Mishima (played by Ken Ogata) investigates the inner turmoil and contradictions of a man who attempted an impossible harmony between self, art, and society. Taking place on Mishima’s last day, when he famously committed public seppuku, the film is punctuated by extended flashbacks to the writer’s life as well as by gloriously stylized evocations of his fictional works. With its rich cinematography by John Bailey, exquisite sets and costumes by Eiko Ishioka, and unforgettable, highly influential score by Philip Glass, Mishima: A Life in Four Chapters is a tribute to its subject and a bold, investigative work of art in its own right.

Paul Schrader is a renowned American screenwriter and film director. After graduating from film school in Los Angeles he worked as a film critic until selling his first script in 1975, THE YAKUZA. The next year he wrote the screenplay for Martin Scorsese's TAXI DRIVER, the success of which led to his 1978 directorial debut, BLUE COLLAR. Known for his depictions of desperate men with moral ambivalence, he has written several screenplays, including three more with Scorsese: RAGING BULL (1980), THE LAST TEMPTATION OF CHRIST (1988) and BRINGING OUT THE DEAD (1999). He has also directed movies, often from his own scripts, including AMERICAN GIGOLO (1980), AFFLICTION (1997) and a movie about Japanese writer Yukio Mishima, MISHIMA: A LIFE IN FOUR CHAPTERS (1985), which is regarded as one of the greatest of biographical films in the history.