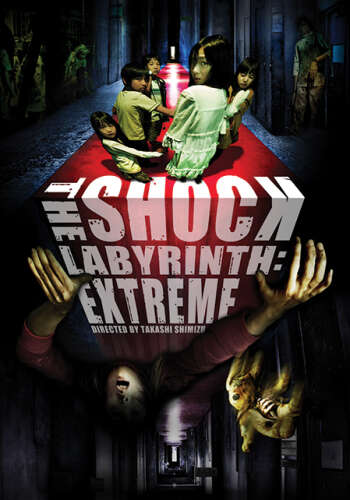 THE SHOCK LABYRINTH marks Japan's first foray into the world of live-action 3-D feature films. The story follows a group of teenagers dealing with the disappearance of a childhood friend, Yuki, who was last seen in an amusement park’s haunted house. On a rainy day, 10 years after the incident, Yuki inexplicably returns. However, soon after reuniting with her friends, she collapses, and the group rushes her to a nearby hospital. But things are not quite as they seem at the medical center. As the night wears on, the group sinks deeper and deeper into the events from a decade ago that led to Yuki’s disappearance.

Takashi Shimizu was born in 1972, in Gunma Prefecture. On the recommendation of director Kiyoshi Kurosawa and writer Hiroshi Takahashi, he made his debut with a short film for Kansai TV in 1998. Directing from his own scripts for V-Cinema, he scored a word-of-mouth success with JUON: THE CURSE and JUON: THE CURSE 2 in 1999, which led to their reimagining as theatrical features, the smash-hits JUON: THE GRUDGE (02) and JUON: THE GRUDGE 2 (03). At the request of director Sam Raimi, who produced the film, he remade his first film as THE GRUDGE (04). It took in more than $100 million in box-office receipts, and was the number one motion picture in the U.S. for two weeks running, the only time this has ever been accomplished by a Japanese director. A sequel, THE GRUDGE 2, also hit the number one position. A very low-budget film he made in 2004, STRANGER FROM AFAR, won the Golden Raven award at the Brussels International Festival of Fantasy Film. His other work includes TOMIE: REBIRTH (01), REINCARNATION (05), as well as work in the comedy series GHOST VS ALIEN (00~07), the serial drama THE GREAT HORROR FAMILY (04), and HIJOSHI ZUKAN (08). He has several projects under way, both in Hollywood and Japan.