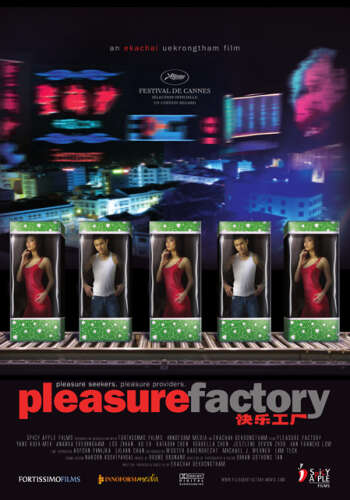 Inspired by true stories and real-life characters, PLEASURE FACTORY tells an intimate and seductive tale involving pleasure seekers and pleasure providers in Geylang, Singapore's red light district. In the course of one night, an army boy loses his virginity with the help of his experienced buddy; a teenage girl gets initiated into the pleasure manufacturing process; and a jaded prostitute pays a young busker good money in exchange for a song he never gets to sing.

The first feature film ever to be shot entirely on actual locations in Geylang, it stars Golden Horse Best Actress Yang Kuei-Mei (Ang Lee's EAT DRINK MAN WOMAN) and Ananda Everingham (Thai Horror Hit SHUTTER) alongside a cast of fresh talents found through street casting in the red light district and around Singapore.

His first feature film Beautiful Boxer (2003), based on the true story of Thailand 's famed transsexual kickboxer, has garnered two Thai "Oscars" and twelve other awards from international film festivals around the world. He was named Asia's Most Promising Director at the 2004 International Film Festival of India, and Outstanding Emerging Talent at Outfest 2004 in Los Angeles. Beautiful Boxer was nominated for the GLAAD 2006 Media Award for Outstanding Film – Limited Release (USA).

A recipient of the Singapore Youth Award and the JCCI Culture Award, Ekachai was named one of the 20 Leaders of the New Millennium for Society & Culture by Asiaweek. He has previously headed the Development Unit of Thailand's GMM Pictures and the Singapore headquarter of Sir Cameron Mackintosh, producer of Les Misérables, Miss Saigon and Phantom of the Opera. He has also recently set up Spicy Apple Films, a film production company based in Singapore.