FOR A LOST SOLDIER 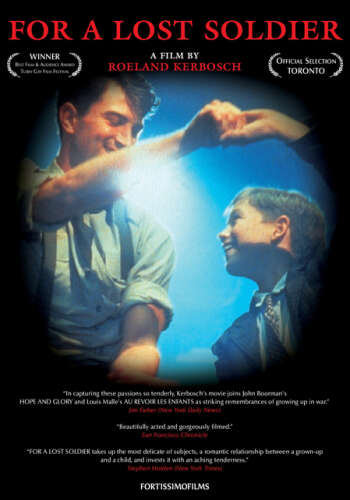 In 1944, 12-year-old Jeroen is evacuated from Amsterdam to the north of Holland in order to escape the deprivations in the West of the country. He is placed in the care of a fisherman and his family who love and nourish the withdrawn and isolated Jeroen. With the onset of puberty, Jeroen remains a spectator in the games and stories which mark the beginning of sexuality - that is until the Allies arrive.

The Allies bewitch and capture the attention of the villagers with their uniforms, their weapons and their language of freedom. Among the soldiers is one who particularly captures Jeroen's attention - Walt. After an evening's entertainment supplied by the Canadian soldiers, Walt teaches Jeroen the joys of the Jitterbug and the Jive. From this, a powerful relationship is formed.