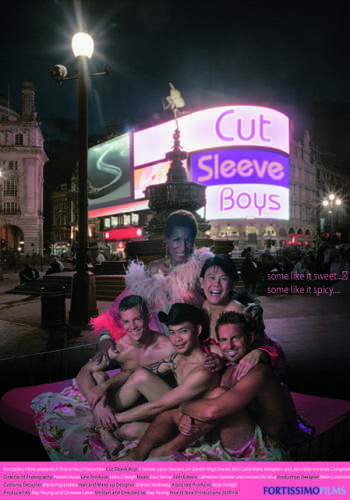 Mel and Ash are two British Chinese gay men who studied and drink Lychee Martinis together. After attending the funeral of Gavin, a closet case from their university days, they start examining the crow’s feet on their faces and questioning the meaning of the labels in their wardrobes.

Mel, an aging scene queen with the ego of Norma Desmond, believes life is a beauty pageant with him always the winner.  He rejects the love of Todd, a provincial boy from the Welsh valleys who moves to London to be with him, in favour of quick-fix Botox sex to fight his insecurities. But how long can he sashay down the catwalk when his eye bags are bigger than his Gucci bags? And who is going to be waiting at the end of the rainbow when there is no place like home?

Ash is tired of the jaded gay scene where steroid bodies and the Atkin’s diet are the only offerings on the menu and all the macho posing only reveals a Farah Fawcett in the bedroom. He meets Diane (a.k.a Dan) a transexual from their college days with a butch, sexy and straight looking ex army boyfriend, Ross. Ash decides the only way for him to find a real man is to click on those Jimmy Choo’s. Will his foray into the wonderland of tranny burrows and tranny chasers bring him his dream man?

Not to be upstaged, the dead but not forgotten Gavin has a posthumous secret up his leg of mutton sleeves waiting to explode!

With witty one liners, underground drag club, sex in public toilets and an all male production of the Miss Pacific Rim Beauty Pageant, CUT SLEEVE BOYS is a quirky stir fried journey of self discovery and ultimately, a makeover of the British Chinese gay experience.

Ray Yeung is a qualified lawyer, chairman of the Hong Kong Lesbian & Gay Film Festival Society, and a successful and award-winning producer and director of plays, commercials and shorts. Ray Yeung has written and directed three short films: A CHINK IN THE ARMOUR, A BRIDGE TO THE PAST, funded by the British Arts Council, and YELLOW FEVER which won the Audience Award in Madrid Lesbian and Gay Film Festival. CUT SLEEVE BOYS is Ray Yeung's first feature film.